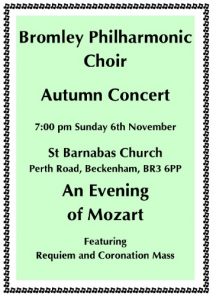 On Sunday 6th November at 7pm, the Bromley Philharmonic Choir host their Autumn Concert, An Evening of Mozart, at St Barnabas.

It includes his “Requiem Mass in D Minor” (K. 626). This was composed in Vienna in 1791 and left unfinished at the composer’s death on December 5, with a completion by Franz Xaver Sussmayr the following year. The Choir will also be performing Mozart’s “Coronation Mass in C Major” (K. 317), completed in 1779 in Salzburg, after Mozart’s return to the city and “Misericordias Domini”, written four years earlier when Mozart was only nineteen which is considered a minor masterpiece.